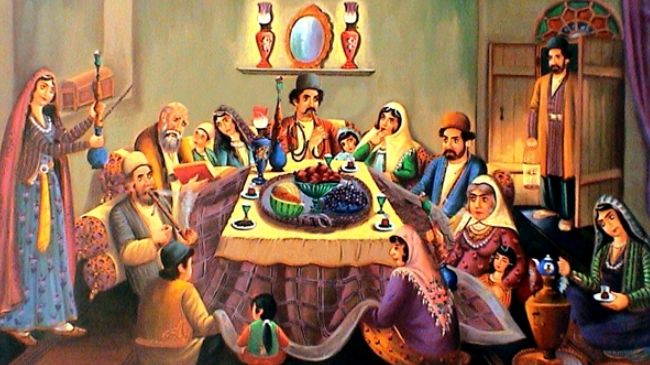 Shab-e Yalda (“Yalda night” Persian: شب یلدا‎) or Shab-e Chelleh (“night of forty”, Persian: شب چله‎) is an Iranian festival celebrated on the “longest and darkest night of the year,”.  Yalda is a winter solstice celebration, that is in the night of the Northern Hemisphere’s winter solstice. Calendrically, this corresponds to the night of December 20/21 (±1) in the Gregorian calendar. And to the night between the last day of the ninth month (Azar) and the first day of the tenth month (Dey) of the Iranian civil calendar.

The longest and darkest night of the year is a time when friends and family gather together to eat, drink and read poetry (especially Hafez) until well after midnight. Fruits and nuts are eaten and pomegranates and watermelons are particularly significant. The red color in these fruits symbolizes the crimson hues of dawn and glow of life. The poems of Divan-e Hafez, which can be found in the bookcases of most Iranian families, are read or recited on various occasions such as this festival and Nowruz. Shab-e Yalda was officially added to Iran’s List of National Treasures in a special ceremony in 2008.

The longest and darkest night of the year marks “the night opening the initial forty-day period of the three-month winter”, from which the name Chelleh, “fortieth”, derives. There are all together three 40-day periods, one in summer, and two in winter. The two winter periods are known as the “great Chelleh” period (1 Day to 11 Bahman, 40 full days); followed/overlapped by the “small Chelleh” period (10 Bahman to 30 Bahman, 20 days + 20 nights = 40 nights and days). Shab-e Chelleh is the night opening the “big Chelleh” period, that is the night between the last day of autumn and the first day of winter. 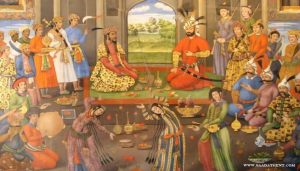 In Zoroastrian tradition the longest and darkest night of the year was a particularly inauspicious day; and the practices of what is now known as “Shab-e Chelleh/Yalda” were originally customs intended to protect people from evil (see dews);  during that long night, at which time the evil forces of Ahriman were imagined to be at their peak. People were advised to stay awake most of the night, lest misfortune should befall them, and people would then gather in the safety of groups of friends and relatives, share the last remaining fruits from the summer.

Find ways to pass the long night together in good company. The next day (i.e. the first day of Dae month) was then a day of celebration, and (at least in the 10th century, as recorded by Al-Biruni), the festival of the first day of Dae month was known as Ḵorram-ruz (joyful day) or Navad-ruz (ninety days [left to Nowruz]). Although the religious significance of the long dark night have been lost, the old traditions of staying up late in the company of friends and family have been retained in Iranian culture to the present day.